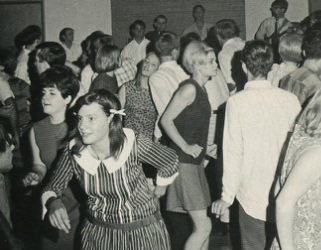 When you hire a DJ you get music. When you book a dance party you get an  event.

Dance parties are sets of music around a  theme. They can be a single theme, like "Fifties Night" or can be bundled so that the evening is broken into sets like Motown, British Invasion, and Disco.

A dance party includes a theme appropriate "competition." A "twist" dance-off is a lot of fun, and there is usually no shortage of competitors, since the twist doesn't actually require a partner or any skill for that matter. A  panel of "experts is" easily recruited from the attendees, which gives even  non-dancing participants a fun role in the festivities.

Voting is carried out via the non-scientific  "applause-o-meter," and the winner(s) receive a crown/tiara crafted from real plastic.

Dance Party Themes are limited only by your imagination.  Here are some suggestions:

Death by  Disco
You know all the songs, and so will your guests. Have  your guests dress up in their best disco-era garb. Present an award for best costume! We have the mirrored ball and the colored lights to completely transfom the venue into Studio 54. The Hustle. The Bump. Your guests will be partying like it's 1975!

Fifties  Night
Poodle skirts. Saddle shoes. Sweaters. Really uncomfortable and unattractive lingerie. What's not to love about the fifties? Toss in some Doo-wop, Connie Francis, Bill Haley & the Comets, a generous helping of Elvis, and wash it down with a hi-ball or a Hamm's beer (from the land of sky-blue waters) and you have the recipe for fun and laughter. Get in touch with your inner Greaser!

British Invasion!
The hottest party this side of Carnaby Street! The Stones, Beatles, Dave Clark 5, Dusty, Petula, Gerry, and dozens of bands and singers you never hear on that oldies station. You supply the go-go dancers, we'll supply the lights, the trivia questions, and the gag gifts. Oh behave!

Life's a  Beach!
It could be argued that the British invasion was heavily inspired by the youth culture and music of the West Coast...the wave of surf music that swept over the whole world. The Beach Boys. Songs about cars. Beach movies. Skateboards. You invite the wahinis and kahunas, we'll bring the excitement. Hint: It's limbo time!

Sadie Hawkins Lives!
What could be more politically incorrect than a Sadie Hawkins party? Unleash the inner amazons in your club or circle of friends with a party where every dance is ladies choice. The music? From Leslie Gore to Shania Twain, nothing but hits that will have your guests rockin', laughing, and digging out their cameras to catch the "beauty pageant."

Texas  Roadhouse
That place on the edge of town with the loud music, parking lot filled with pickup trucks, and music that never stops. The place with the bad reputation that your Momma would never in a million years let you go to? Yep...that's the place. Cowboy boots, jeans, t-shirts, and hats! With a little BBQ and a lot of Shiner Bock on ice you can create a party that will make the most urbane cowboy/cowgirl shout yee-hah. Asleep at the Wheel, ZZ Top, Lyle Lovett, Stevie Ray Vaughan, Susan Tedeschi, The Fabulous Thunderbirds and plenty of boogie-woogie and Texas swing that will set your guest on fire at eight-to-the-bar!

Psychedelic Sixties
Turn on, tune in, drop out! Granny glasses, nehru jackets, and flowers in their hair...be sure to have your guests come in costume! A light show and cheap Cost Plus incense will set the mood, and the Strawberry Alarm Clock, Jefferson Airplane, The Doors, The Byrds, The Turtles, The Electric Prunes will provide the soundtrack. It's the Summer of Love without the acne or bad acid. Can you dig it?

Sell Your Soul Train
Relive a decade of cool, funky, music that started in Motown and exploded onto the gym floor at your homecoming dance!  A vertical tasting of smokin' sounds from Temptations, Drifters, Chi-Lites, Little Anthony, The Supremes, The Four Tops, Sam Cooke, Marvin Gaye, Jackie Wilson, Gladys Knight, The Jackson 5, Kool & the Gang, Parliament, George Clinton, The Commodores, and many others. Stick around for the dance-off..find out which of your friends STILL has the baddest boogaloo and the sexiest shingaling.

Land of a Thousand Dances
Back in the good old days bands sought to carve out a place on the charts with a song tied to a new dance. It started with the Diamond's "The Stroll." Chubby Checker was the most successful with "The Twist" but don't forget the Pony, the Mashed Potato, the Jerk, the Swim, the Hully Gully, the Hitch Hike, the Monkey, the Fly, the Tighten-Up, and the Locomotion. Then there were the "advanced" dances like the Madison (an east coast thing)  the Watusi (harder than it looks) and bringing an end to an era...Freddie and the Dreamer's "the Freddie." and then nothing until....DISCO!  Let's see which of your friends, colleagues, or club members can win the coveted King/Queen of the Land of a Thousand Dances crown(s) not to mention the envy of everyone in the free world.

Attack of the 50 foot Prom Night
Dig out those prom dresses (oh yeah, right) or make a quick trip to the consignment or Salvation Army store for an appropriately hideous prom gown. Guys, start looking now for the baby blue tuxedo. Oh yes....the punch will be spiked and there will be groping on the dance floor to the slow tunes of the Platters, the Casinos, Elvis, and other classics. You will be voting for a prom queen and king!  Expect surprises, laughs, poorly applied makeup, and yes, you WILL be serving detention on Monday after school.